Free – $10
In-person at the J
Join us for an in-person author talk and Q&A with Alan Zweibel, who will be discussing his new book Laugh Lines: My Life Helping Funny People Be Funnier. 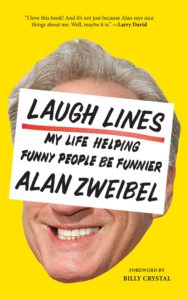 Alan Zweibel started his comedy career selling jokes for $7 apiece. Then he caught the attention of Lorne Michaels and became one of the first writers at Saturday Night Live, where he penned classic material for Gilda Radner, John Belushi, and all of the original Not Ready For Prime Time Players. Zweibel weaves together his own stories and interviews with his friends and contemporaries, including Richard Lewis, Eric Idle, Bob Saget, Mike Birbiglia, Sarah Silverman, Judd Apatow, Dave Barry, Carl Reiner, and more. The book also features a charming foreword from his friend Billy Crystal.
Alan Zweibel has won multiple Emmy and Writers Guild awards for his work in television, including Saturday Night Live, It’s Garry Shandling’s Show, The Late Show with David Letterman, and Curb Your Enthusiam. In 2010, Zweibel was given an honorary Ph.D. from the State University of New York, and in 2013, the Writers Guild of America presented him with a lifetime achievement award.
Cost: Free for JCC members, $10 general public
Pre-registration is required. To register, click here.
+ Add to Google Calendar