The Keeper – Watch it at Home

A decorated ex-Nazi paratrooper plays for redemption on the soccer field in this rousing and romantic drama, based on a true story.

Released from a British prisoner-of-war camp, Bert Trautmann’s goalkeeping skills secure him a position on the Manchester City team, where he catches the eye of the club manager’s daughter Margaret. But his arrival also arouses the post-war ire of fans, many of them Jewish. With unexpected support from a local rabbi, Trautmann wins over his critics, famously playing the 1956 FA Cup Final with a broken neck. Unbeknownst to him was that his greatest challenge was yet to come.

Co-sponsored by Betsey and Malcolm Freedman 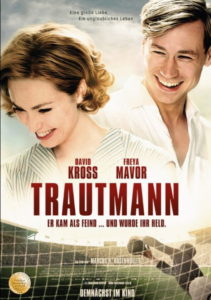