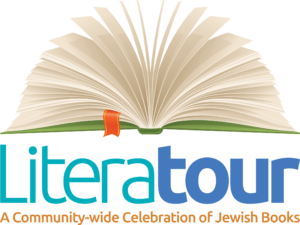 This season brings an exciting lineup of exceptional authors, celebrities, and cultural influencers, whose books represent a broad range of topics. Through Literatour, fellow book lovers come together to listen, meet and interact with their favorite authors in a variety of forums, including author meet-and-greets, book signings, panel discussions, concerts, and more. Advance registrations are required by clicking the appropriate links below, calling the J at (413) 739-4715, or signing up in person at the J. Please note that some authors will appear in person and others via Zoom.

We are excited to announce that The Odyssey Bookshop, located at 9 College Street in South Hadley at the Village Commons, is the Official Book Seller for Literatour. Books will be available for purchase and autograph at all in-person events. All books can be purchased at the Springfield JCC.

Ira Rosen, "Ticking Clock: Behind the Scenes at 60 Minutes"

Thursday, September 23, 7:00 PM
Online Program (Zoom)
Former 60 Minutes producer Ira Rosen offers an incisive look at the show that invented TV journalism. With surprising humor, charm, and an eye for colorful detail, Rosen delivers an authoritative account of the unforgettable personalities, including the infamous Mike Wallace, who battled for prestige, credit, and the desire to scoop everyone else in the game. A maser class in how TV news is made, Rosen shows readers how 60 Minutes puts together a story when sources are explosive, unreliable, and even dangerous.
Ira Rosen is a two-time Peabody Award winning writer and producer. He spent nearly 25 years producing some of the most memorable, important, and groundbreaking stories for 60 Minutes.
Register

Jenna Blum, "Woodrow on the Bench: Life Lessons from a Wise Old Dog"

Tuesday, November 2, 6:30 PM
In-person at the J
Known to many as “the George Clooney of dogs” for his good looks and charm, Woodrow and his “Mommoo” are fixtures in their Boston neighborhood. But Woodrow is aging. As he begins to fail, the true nature of his extraordinary relationship with Blum is revealed. A divorcee who has experienced her share of sadness and loss, Blum discovers, over the months she spends caring for her ailing dog, what it is to be present in the moment, and what it truly means to love.
Jenna Blum is the New York Times internationally bestselling author of Those Who Save Us, The Stormchasers, and The Lost Family. She’s one of Oprah’s Top 30 Women Writers and a professional speaker. Prior to her debut as a novelist, Blum spent four years documenting the stories of Holocaust survivors as an interviewer for Steven Speilberg’s Shoah Foundation.
Register

Mark Oppenheimer, "Squirrel Hill: The Tree of Life Synagogue Shooting and the Soul of a Neighborhood"

Wednesday, November 10, 7:00 PM
In-person at the J
On October 27, 2018, a gunman killed eleven Jews who were worshipping at the Tree of Life Synagogue in Squirrel Hill – the most deadly anti-Semitic attack in American history. Many neighborhoods would be understandably subsumed by despair after such an event, but not this one. By speaking with residents and nonresidents, Jews and gentiles, survivors and witnesses, teenagers and seniors, activists and historians, Mark Oppeheimer provides a kaleidoscopic and nuanced account of collective grief, love, support, and revival.
Springfield-area native Mark Oppenheimer is the author of five books, a former religion columnist for The New York Times, and a host of Tablet’s podcast Unorthodox, the word’s leading Jewish podcast. Oppenheimer has taught at Standford, Wellesley, and Yale.
Co-sponsored by Temple Beth El
Register

Tuesday, December 7, 7:00 PM
Online Program (Zoom)
Jake, once a promising novelist, is now teaching a third-rate MFA program. When his most arrogant student announces they don’t need his help, Jake is prepared to dismiss the boast as amateur narcissism. Jake braces himself for the supernova publication of his student’s first novel, but it never comes. When he discovers that his former student has died, Jake does what any self-respecting writer would do with a story like that – a story that absolutely needs to be told. In a few short years, all of his student’s predictions have come true, but Jake is the author enjoying the wave. But at the height of his glorious new life, an email arrives, the first salvo in a terrifying, anonymous campaign: Your are a thief, it says.
Jean Hanff Korelitz is the author of the novels You Should Have Known (which aired on HBO in October 2020 as The Undoing), Admission, The Devil and Webster, The White Rose, The Sabbathday River and a Jury of Her Peers, as well as Interference Powder.
Register

Wednesday, January 12, 2:00 PM
Online Program (Zoom)
Yaakov and Leah are plunged into their lives together as Yaakov leaves his yeshiva to work in the city, and Leah confronts the restrictions imposed by religious laws that govern even their most intimate moments. Adding to their difficulties is the hostility of some who continue to view Leah as a dangerous interloper, questioning her adherence to religious laws and spreading outrageous rumors. In the midst of their attempts to reach a balance between their human needs and their spiritual obligations, the discovery of a forbidden relationship between their troubled teenage daughter and a local boy precipitates a maelstrom of life-changing consequences for all.
Naomi Ragen is an award-winning novelist, journalist, and playwright. Her first book, Jephte’s Daughter, was listed among the 100 most important Jewish books of all time. Her bestselling novels include Sotah, The Covenant, The Sisters Weiss, and Devil in Jerusalem.
Register

Andrew Feiler, "A Better Life for Their Children: Julius Rosenwald, Booker T. Washington, and the 4,978 Schools that Changed America"

Thursday, February 3, 7:00 PM
Online Program (Zoom)
Born to Jewish immigrants, Julius Rosenwald rose to lead Sears, Roebuck & Company. Born into slavery, Booker T. Washington became the founding principal of Tuskegee Institute. In 1912 the two men partnered with Southern Black communities to build public schools for African American children. This collaboration between Jews and African Americans drove dramatic improvement in African American educational attainment and fostered the generation who became the leaders and foot soldiers of the civil rights movement. Andrew Feiler photographed 105 schools and interviewed dozens of former students, teachers, preservationists, and community leaders. Includes a forward from Congressman John Lewis.
Having grown up Jewish in Savannah, Andrew Feiler has been shaped by the rich complexities of the American South. He has created numerous community initiatives, serves on multiple not-for-profit boards, and is an active advisor to political leaders. His art is an extension of his civic values.
Co-sponsored by Temple Beth El and the Springfield Museums, home of The Amazing World of Dr. Seuss
Register

Tuesday, March 8, 7:00 PM
In-person at the J
In 1938 physicist Dr. Hannah Weiss was on the verge of the greatest discovery of the 20th Century: splitting the atom. As a Jewish woman living under the rule of the Third Reich, her research is belittled, overlooked, and eventually stolen by her German colleagues. In 1945 Major Jack Delaney, wounded from the liberation of Paris, returned to New Mexico with a mission: to catch a spy. Someone in the top-secret nuclear lab at Los Alamos has been leaking encoded equations to Hitler’s scientists. Chief among Jack’s suspects is Hannah Weiss. All signs point to Hannah as the traitor, but over three days of interrogation, Jack will realize they have more in common than either one bargained for.
Jan Eliasberg is an award-winning writer and director. Her prolific directing career includes dramatic pilots for CBS, NBC, and ABC, such as Miami Vice and Wiseguy; countless episodes of TV series including Bull, Nashville, Parenthood, The Magicians, Blue Bloods, NCIS: Los Angeles, and Supernatural.
Register

Valerie Gilpeer, "I Have Been Buried Under Years of Dust: A Memoir of Autism and Hope"

Thursday, April 7, 7:00 PM
Online Program (Zoom)
“I have been buried under years of dust and now I have so much to say.” These were the first words 25-year-old Emily Grodin ever wrote. Born with nonverbal autism, Emily’s only means of communicating had been only one-word responses or physical gestures. That Emily was intelligent had never been in question—from an early age she’d shown clear signs that she understood what was going on though she could not express herself. Her parents sought every therapy possible in the hope that Emily would one day be able to reveal herself. When this miraculous breakthrough occurred, Emily was finally able to give insight into the life, frustrations, and joys of a person with autism.
Valerie Gilpeer has been an attorney for 40 years. For the past two decades she has focused on disability rights.
Register

Thursday, May 12, 7:00 PM
In-person at the J
Alan Zweibel started his comedy career selling jokes for $7 apiece. Then he caught the attention of Lorne Michaels and became one of the first writers at Saturday Night Live, where he penned classic material for Gilda Radner, John Belushi, and all of the original Not Ready For Prime Time Players. Zweibel weaves together his own stories and interviews with his friends and contemporaries, including Richard Lewis, Eric Idle, Bob Saget, Mike Birbiglia, Sarah Silverman, Judd Apatow, Dave Barry, Carl Reiner, and more. The book also features a charming foreword from his friend Billy Crystal.
Alan Zweibel has won multiple Emmy and Writers Guild awards for his work in television, including Saturday Night Live, It’s Garry Shandling’s Show, The Late Show with David Letterman, and Curb Your Enthusiam. In 2010, Zweibel was given an honorary Ph.D. from the State University of New York, and in 2013, the Writers Guild of America presented him with a lifetime achievement award.
Register

Brad Aronson, "HumanKind: Changing the World One Small Act at a Time"

Wednesday, June 1, 7:00 PM
Online Program (Zoom)
Brad Aronson’s life changed in an instant when his wife was diagnosed with leukemia. Amid the stress and despair of waiting for the treatment to work, they were met by an outpouring of kindness from friends, family and even complete strangers. Inspired by the many demonstrations of “humankindness” that supported their family through his wife’s recovery, Brad began writing about the people who rescued his family from that dark time, often with the smallest of gestures. Knowing that simple acts of kindness transform lives across the globe every day, he sought out these stories and shares some of the best ones here.
Brad Aronson is a husband and a dad. He teaches urban youth, and everyone in his classes start their own business, which has led to many adventures in entrepreneurship.
Register
Copyright © 2021 Springfield Jewish Community Center - All Rights Reserved | Privacy Policy | Accessibility Statement Website Design by Envision Marketing Group. User Login